KARINAKAS and Kompas Daily held a journalistic workshop on Friday, 1 April 2016 in the KARINAKAS office at Belarasa Building of Pringwulung Yogyakarta. As an organization which stands up for the human’s dignity on the two matters, they are Disaster Risk Reduction and the effort to develop social inclusion with the strategy of Community Based Rehabilitation (CBR), KARINAKAS with hundreds of Caritas members from various countries try to realize the fairer world management for all people, especially they who are minorities, weak, poor, marginal, and different ability (Kecil, Lemah, Miskin, Tersingkir, Difabel/KLMTD). 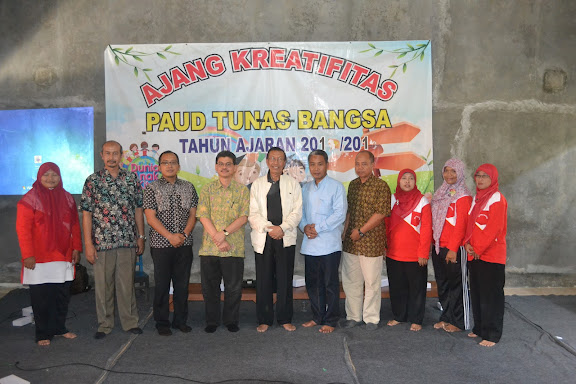 KARINAKAS and Tahija Foundation in Jakarta visited Inclusive Learning Center of Tunas Bangsa in Nguter, Sukoharjo, Central Java on Friday, 19 February 2016. In this occasion, the teachers and parents shared the handling of the children with different ability (difable) to the Tahija Foundation and Karinakas in Inclusive Learning Center of Tunas Bangsa. They who presented in this occasion were the Director of Karinakas, Father A. Banu Kurnianto, Pr,  the Coordinator of Program Managers of KARINAKAS, R. Anang Setiyargo, the Program Manager of KARINAKAS Care Program, Pramono Murdoko, the Chief of Tahija Foundation, A. Wahyuhadi, and the staffs of Tahija office in Yogyakarta, Agus and Budi. The visit was warmly welcomed by Puji Handayani and the assistants of Learning Center/Early Childhood Education and Development of Tunas Bangsa. The head of Nguter Village was also present at that moment. (Photo: Ferry, Translated by: Mita)

The Retreat of Laudato Si Encyclical of Java Region Caritas

Located at Grand Cepu Hotel, Karina of Java Region held a retreat of Laudato Si. This event was attended by Karina of KWI, Karina of Semarang Archdiocese, Malang Diocese, Surabaya Diocese, Bandung Diocese, Bogor Diocese, Purwokerto Diocese and Sibolga Diocese. It was taken place from 22-24 February 2016 and guided by Father Petrus Sunu Hardiyanto, SJ., the Provincial of Society of Jesus.

A Visit to the Beneficiary

On last Wednesday, 18 March 2016, was a happy day. The whole Karinakas management from the Director, Fr. A. Banu Kurnianto, Pr, the Coordinator of Program Manager, Finance Manager, Program Manager, and most of the program staffs visited one of the beneficiaries (the receiver of the program benefit). He is Mr Ngadiman in Ngreco, Weru Sub-district, Sukoharjo. At that moment, the Secretary of Sub-district Area, Mr Supomo, the Village Head of Krajan, Mr Sutejo, and some other village officials in Ngreco, Krajan, Grogol, and Tegalsari were present. They held a reflection and shared their experience in the process of inclusive village development.

From the development of the inclusive village, the community received lots of benefits. Moreover, person with different ability, such as Mr Ngadiman, was able to live independently by making a small grocery stall at his home. The grocery stall which was initiated with a small capital then developing, even Mr Ngadiman prepared to expand his stall with the permanent building.

Mr Ngadiman stated that he initially was shy and did not have self-confidence when Harjono and Mrs Sapto invited him to attend a workshop in the village hall, But, thanks to the persistence of Harjono and Mrs Sapto, Mr Ngadiman who originally only could lie on the bed, then he arose and filled his family life with optimism. Then, Ngadiman joined SHG (Self Help Group) "Ngudi Mandiri" to develop his talent to help each other and to work together to produce various products which were useful for the community (Author: Ferry, Translated by: Mita)

Field Visit - to the Slope of Merapi

Saturday, October 27, 2012, Catholic Aid Agency for England and Wales (CAFOD) visited the communities which are assisted by KARINAKAS in the slope of Merapi mountain in Tegalrejo village, Kemalang sub-district, Klaten district. Along with KARINAKAS staff, CAFOD had dialogue in 6 km from the Merapi summit.

Read more: Field Visit - to the Slope of Merapi

On Sunday, October 21 & 28, 2012, children of reading group member from 3 assisted villages of CBR KARINAKAS Bantul held an outbound in Kampung Dolanan, Pojok Budaya, Sewon, Bantul. On the first day, the activity was attended by 31 children including 7 children with disabilities (Down-Syndrome, Blind, SCI, and MR) from Plebengan, Sidomulyo village and Kralas, Canden village. On the second day, the activity was also attended by 31 children including 7 children with disabilities (Down-Syndrome, CP, SCI, MR and Hearing Impairment) from Gaten and Srayu, Canden village as well as Jamprit, Panjangrejo village.

“Hopefully, this reading group outbound could give opportunities for children with disabilities (CWDs) and other children to play and do activity together,” said Margaretha Widiastutik, the staff of Education sector in CBR KARINAKAS Bantul.

After  doing the study for two months, DRR program of KARINAKAS decided the new assisted communities, they are Melikan village in Klaten district and Tegalrejo village in Gunung Kidul district.

Together, Sharing and Caring...